Ok here is my big question for all you Photonics buffs and Laser geeks:

My friend Tim takes a high speed photo of the eclipse and it looks like the first one. You see a small inner Corona, and even some red prominences.  They stream away from the sun though there is a hint of red rolling over the moon.  My photo (the second) was taken with a longer exposure and captures both the inner and outer Corona, (with a clean dividing line). But look what happened to the prominences!   They defused over the surface of the moon. 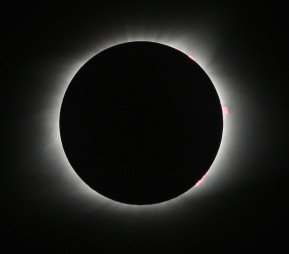 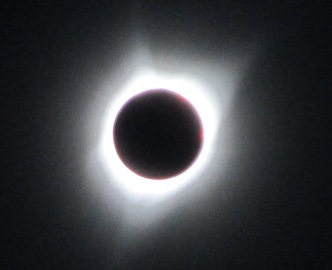 Can some one explain how this happens. The moon has no atmosphere and the sun is 93 million miles behind it.  Was it diffraction of the light passing over the tips of the mountains  on the moon?  Or was it like my daughter Miesha explained: “The Red was wax wrapping around the green cheese”.

As for the experience of the totality itself:

The Dark comes on fast. In a blink it swept past the hills near by and, before I could turn around, covered the ones in the distance. Actually noticed Jupiter first as I turn back and then saw that orb that captivates.   Tom recalls the sudden drop in temperature; Stan called it life changing as the birds went silent.

5000 feet up in a forest opening with a few hundred campers in Malheur National Forest in Oregon. A make shift city sprung up as all the campsites were gone a week ago. Good people, friends, and their family.  (I’m standing behind Amir and Dusanka) 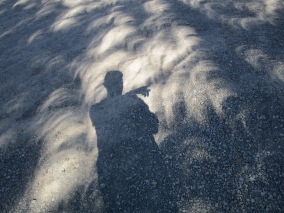 3 guys, 1500 miles in a rented sensational Ford Expedition, 3 nights, and incredible memories.  Plus the last night in Reno was OK too.

We at Laser Mark's Company are ready to help you with your next project, be it a prototype or large production run. With our vast experience and wide variety of laser technologies, we are able to provide top-notch laser services.